It happens to all of us. Three snoozes too late, you drag yourself out of bed into the shower. Make it a cold one, quick and clean. Whew! Record time! But then, you reach into the underwear drawer, and not a single pair is to be found! Your dreaded enemy time has just come face to face with your other nemesis laundry. Whatever shall you do?

The classic case of underwear-induced closet collapse is reminiscent of the longstanding ecological idea that biodiversity buffers ecosystems from environmental insults and destructive human activities. Overfish one squid-eating species and another will gladly eat a little more squid to do its part, run out of underwear use a pair of shorts instead. Um, yes.

Uncomfortable yet? You should be. Reeks of controversy!

So, every ecosystem is a closet, and the species are merely clothes in it. If every garment has ten like it, then it should be fairly easy to keep track of when it’s time to do laundry. But, what have we learned so far? You have way more tops than pairs of underwear, and who washes pants anyway? Lose a few shirts and you’ll be fine, but lose a pair of underwear (as happens all the time), and you’re one step closer to impending laundry. Implicit in the idea that biodiversity is nature’s insurance policy is that redundancy is uniform across all species that compose an ecosystem, and, according to a recent study by Mouillot et al. published in PNAS, it isn’t.

To investigate the relationship between species vulnerability and species richness, Mouillot and co-workers surveyed six tropical-reef fish “faunas” across a “nine-fold gradient of species diversity” (i.e., a low of 403 fish species in the Eastern Atlantic, and a high of 3,689 in the Central Indo-Pacific). They categorized fish from 6,316 species into 646 “functional entities” defined by combinations of six unique traits representing the ecological roles played by a particular species and went on to assess functional richness (the functional breadth of a given fauna), functional redundancy (how functional entities are distributed within a fauna), and vulnerability (how deeply affected a given fauna might be by species loss).

To support assumption of a conserved “functional core” across ecosystems, the authors built a “global functional space” encompassing the breadth of all possible combinations of six functional traits. Just as your closet might cover the same functional space as Elton John’s, despite the difference in variety (and necessity) of garments, functional space filled was found to be roughly the same across faunas rich and poor. For example, while the poorest fauna represents only 25 percent of functional entities, it still fills more than half (59 percent) of the functional space defined by all possible combinations of functional traits. Hence, in more species-rich environments, species are “packed” more densely, but the overall ecosystem functions are conserved. To balance it all out, the number of new functional entities that emerges with increased diversity increases at a much slower rate than species richness (roughly one new functional entity for every ten additional species).

The idea of increasing functional redundancy with increasing species richness is old news, but where Mouillot et al. take a turn into uncharted waters is in challenging the notion that this increase in functional redundancy equates to increased robustness to species loss. It’s your birthday, and your multitude of generous friends and family gift you nothing but clothes. Score! No laundry for weeks! Not so fast – only your eccentric aunt gave you a hand-knitted pair of long underwear. The rest gave you mostly shirts and socks.

Mouillot et al. call a foul on the notion that species richness equates with ecosystem robustness in even the most diverse fish faunas on earth, those of tropical coral reefs. By introducing the concept of the functional over-redundancy, they present a framework that might be extended beyond coral reefs toward understanding the vulnerabilities of other ecosystems. By considering ecosystems by functional organization rather than simply species abundance and diversity, Mouillot et al. present a promising approach for the design of intelligent strategies for managing and restoring ecosystems through identification of functional vulnerabilities in healthy ecosystems, and functional deficiencies in those that are struggling.

The takeaway—in this life you may have too many clothes, but you can never have enough underwear. 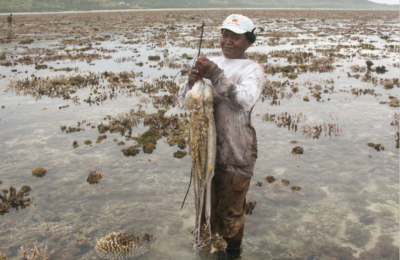