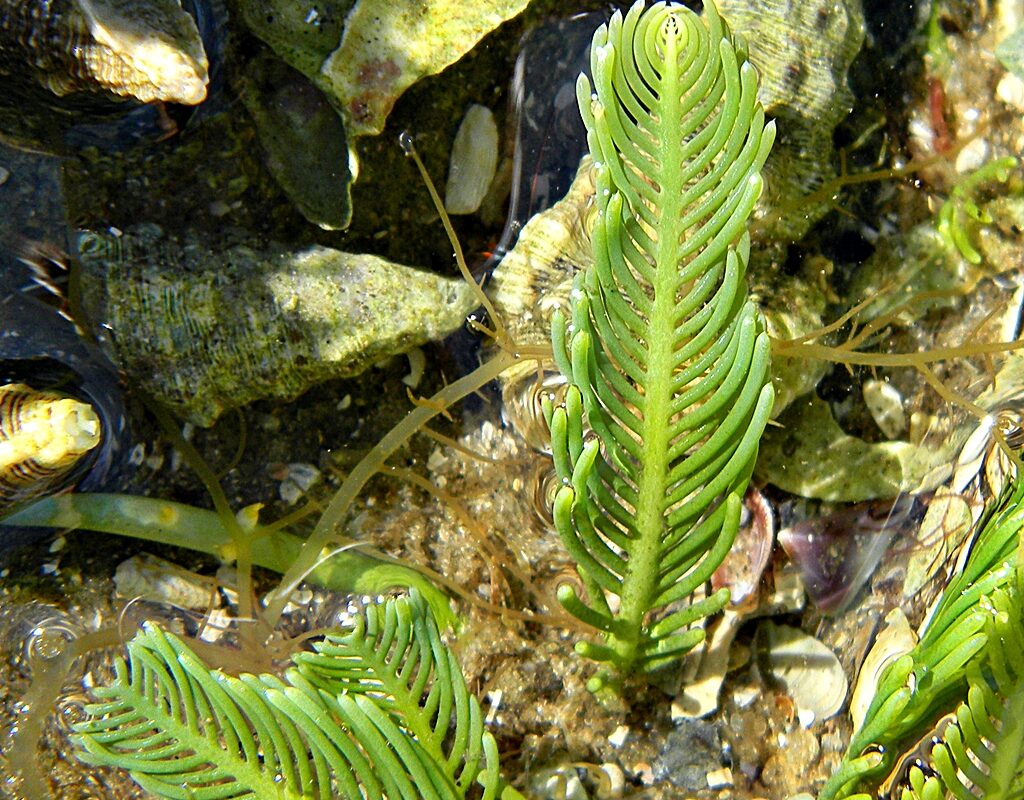 Have you ever asked a magical 8-ball a question? Have you ever seen a psychic or had your tarot cards read? It’s all about the future! As humans, we are constantly curious of what will happen to us. Whether it is about our career aspirations or what is for dinner tonight, we are constantly wondering what’s next in our lives. Well, it’s not surprising to think that scientists care about the future of our planet! A lot of research shows that our world is changing, especially our oceans. The water in the ocean is generally becoming warmer and more acidic (because of carbon dioxide). Just like us humans adapting to the colder weather of winter by wearing a jacket, how will living things in the ocean (especially plants) respond to these chemical changes? Scientists are seeing that plants are slowly travelling to more suitable environments as the ocean changes. Unfortunately, invasive species (types of organisms that are not native to a certain area which can cause large financial and environmental harm) of plants are populating new areas too. Today, we will look at how invasive aquatic plant species respond to the changing chemical conditions of the ocean, asking will they die or thrive?

A team of scientists from Kunsan National University, Incheon National University, and Tongyeong, Korea investigated this question. The team studied the green feather algae, also known as Caulerpa sertularioides, which is usually found in tropical (warm) waters but has begun to spread around the world. In their laboratory facilities, the group grew the algae in water conditions which simulate future climate change off the coast of Korea and examined the algae’s growth. Specifically, the team focused on warmer water temperatures and higher carbon dioxide levels for their algae. So how does the algae fair with (simulated) climate change?

The team found that the invasive species of green feather algae grew faster with both warmer waters and more carbon dioxide! Furthermore, the group saw that the algae also performed more photosynthesis with these simulated climate change conditions! Both of these results indicate that the algae could successfully populate the coast off of Korea and harm the already established ecosystem there. Interestingly, the algae did not grow as effectively when there was only warm or higher carbon dioxide conditions, so the plant responded the best when both conditions were present. The group also examined how different parts of a singular plant grew in response to the simulated climate change conditions. They found that the stolons (or stalks) grew faster in comparison to the fronds (or leaves). All of these conclusions lead the group to understand how climate change could allow for the green feather algae to proliferate along Korea’s coasts.

First, the team purchased and grew a population of the algae in their own laboratory. Originally, the group simulated the current water conditions of Korea’s coasts in their own tanks. The group a small sample pf these plants and planted them in new tanks where they would grow in water 10°F warmer, with double the amount of carbon dioxide, or both. As the plants grew, the team measured their growth manually every 3 days. After 15 days, they measured the rate of photosynthesis of the plants by measuring how fast the plants produced oxygen. To support their findings, the group also examined the activity of chlorophyll (the molecule responsible for absorbing sunlight in the process of photosynthesis) inside the plants. With these efforts, the team could identify the connections between climate change and the proliferation of this invasive species.

This investigation informs us of the small-scale effects of climate change that are harder to predict. These conclusions provide further evidence that that the ocean is an incredibly complex environment where organisms respond to their environment in interesting and dynamic ways. With this knowledge, we can better understand and anticipate how climate change will disturb our local environments.