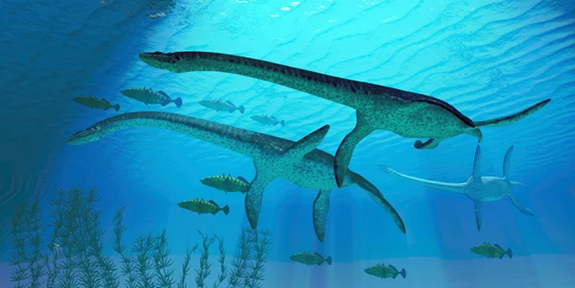 Scientists are close to settling a century-old debate on how Plesiosaurs swam through the prehistoric ocean.

Some scientific debates last for centuries. This month, a question that has been the subject of a 100-year-old debate was nearly settled. The question was: how did plesiosaurs swim through the ancient ocean?

Plesiosaurs had four giant flippers, a long neck, and a stubby tail. For over a century, scientists have been divided into three camps on the subject of Plesiosaur locomotion. Camp one theorized that they used their four flippers as paddles to row through the depths, similar to how sea turtles swim. Camp two believed that Plesiosaurs “flew” underwater like penguins. Camp three suggested a middle option called “rowing flight”, which is how sea lions propel themselves through water. So who was right? And what is a Plesiosaur anyway?

Ancient monsters of the deep

Plesiosaurs were a group of marine reptiles, extinct cousins to modern crocodiles, turtles, lizards, and snakes. These 11-foot long aquatic reptiles appeared in the Jurassic period, according to the fossil record and ruled the oceans as predators for 24 million years, until the mass extinction which ended the Cretaceous period.

Both Plesiosaurs and modern aquatic vertebrates like marine mammals evolved from a land-based, four-legged ancestor. The transition of limbs from walking feet to swimming fins and flippers has led to a wide variety of swimming strategies. The flippers of most species are curved and rounded on the outer edge and tapered at the inner edge, which makes them hydrodynamic.  In most modern marine vertebrates, only the front flippers are used for swimming. However, all four Plesiosaur flippers have the same characteristic shape used for swimming, making them (to our knowledge) the only aquatic vertebrates ever to have had four swimming limbs.

An international team of researchers attempted to settle a century-old disagreement on how Plesiosaurs swam through the prehistoric ocean. The scientists analyzed the appendages of several Plesiosaur skeletons which were held at museums around Europe and then reconstructed muscles on a digital model. They tested the reconstructions by making a giant model Plesiosaur skeleton from bone casts. They simulated the muscles with cords to better understand how the model skeleton attached muscles, bore tension, and functioned.

The researchers concluded that Plesiosaurs twisted their fore and hind flippers to control each limb’s orientation, like four giant rudders, so they could change their direction precisely as they glided or flew through the water like penguins and whales. But unlike whales, Plesiosaurs lacked an impressive tail and used their four powerful flippers to propel themselves, steering with their necks.

At long last the debate is more or less settled. Rather than rowing through the ocean like a sea turtle, Plesiosaurs likely either flew through the water like whales or used a “rowing flight” tactic like sea lions. It seems that camps two and three are tied for now! To see if their conclusions hold up, other scientists will try replicating their work to ensure the results are accurate before officially ending the debate on Plesiosaur movement. Perhaps we could close the debate if Plesiosaurs were brought back to life in the next Jurassic Park!