Where’s the best hiding place in the open ocean?

The world’s largest mass migration on earth happens every day whereby billions of small fish, squid, shrimp, plankton and jellies swim from 500-1000m in deep sea up to the surface waters (0-200m). Some of these animals are quite small, such as copepods, which are less than 1cm in length, meaning they may travel up to one million times their body length every day!

Why partake in such a daily dilemma? The open ocean is a difficult place to live if you are a prey animal (like these small fish and plankton) because the well-lit waters lack places to hide from predators. So, these animals have adapted to seek refuge from the daylight by spending these hours in the depths of deep-sea. The downfall to this solution is that there is much less food available in the deep sea, so they are forced to return to the surface at night to feed under the cover of darkness. This process is referred to as diel vertical migration (DVM), and is a common behavior found in animals throughout the world’s oceans, and even fresh water bodies too!

The discovery of this event was somewhat of an accident. During World War II the U.S. Navy was exploring and mapping the seafloor for submarine navigational purposes by pinging soundwaves, or acoustic signals, to the seafloor and listening for the echo (you might know this as sonar). They noticed an odd layer in the ocean that was reflecting the acoustic signal back to them, referred to as a deep scattering layer (DSL). The Navy first confused this DSL with the presence of enemy vessels or a false reading of the seafloor but, this layer was consistently present and had a rising and falling depth suggesting it was biotic in nature. What the Navy was actually detecting were the sonar soundwaves bouncing off of the bodies of fish and plankton who are densely aggregated together while performing DVM.

Is this the whole picture?

While acoustic techniques provide rich data on the dynamics of DVM (such as time, place, and depth), it has a limited ability to discern which organisms are actually contributing to this mass migration.  Scientists have attempted to bridge this gap in knowledge by using nets to physically sample the animal community. Based on net sampling data, it was thought that Lanternfish, or Myctophids, contributed to the majority of this DSL signal since they appeared to make up at least 65% of deep-sea fish biomass and have gas-filled swimming organs that are particularly good at reflecting soundwaves. However, net sampling methods have their own downfalls. Fish and other mobile animals are known to avoid nets. Additionally, what is actually caught in the net may be biased towards animals that are robust and hardy, as opposed to more delicate or fragile animals that could have been damaged in the sampling process. A research team out of Florida, Dr. Easson and colleagues, took their own angle at identifying the diel vertical migrators by using a completely different sampling method.

“Eat my dust” said the migrators

Dr. Easson and colleagues utilized a new method for sampling the DVM community – analyzing environmental DNA, or eDNA, which involves filtering seawater to collect the remnants of animals.  This method works a lot like a forensic scientist might look for hair or dandruff at a crime scene to identify the culprit. In this case the scientists were looking for tissue, scales, or body fluids animals that are/were recently in the water left behind. Because all biological material contains DNA, it can be molecularly sequenced to identify the animal down to species!

To execute this, they sailed to the open ocean in the Gulf of Mexico and put an acoustic doppler current profiler in the water right before the migration event to find the DSL in real time. Attached to this profiler were water sampling bottles, which were used to quickly collect water before, during, and after animals started migrating. This process was repeated both for the nighttime migration to the surface and the morning migration back to depth. The water was filtered to collect the fragments of animal remains and genetically sequenced to identify which species were present at each time stamp of migration.

Dr. Easson and colleagues found a very different story of the DVM community from eDNA than what was traditionally believed from net sampling. Most of the species they genetically identified from the water samples were small-bodied plankton with very few fish were present. The most dominant potential migrator was the copepod, a small crustacean, which is likely too small to be captured by the sonar beams and may be missed by acoustic data. They also identified many more jellyfish than were sampled in nets, likely because their delicate bodies are destroyed from trawling. These fragile animals are likely large enough to adequately bounce back soundwaves, which suggests that they may be a larger contributor to the DSL acoustic data than previously thought.

By thinking outside of the box, or net rather, Dr. Easson and colleagues shed new light on who is participating in earth’s largest mass migration event. They show that eDNA is a strong method to sample the DVM community and can track behavior less intrusively than nets. With this approach they suggest that we may be over-representing fish in our description of the DVM community and under-representing the small fauna such as copepods and jellyfish who may be below the detection limit of acoustic data or too fragile for nets. 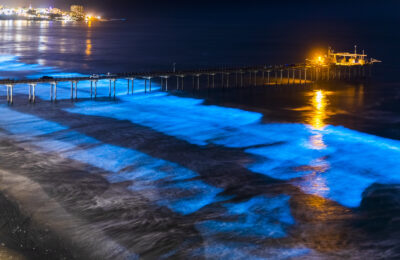