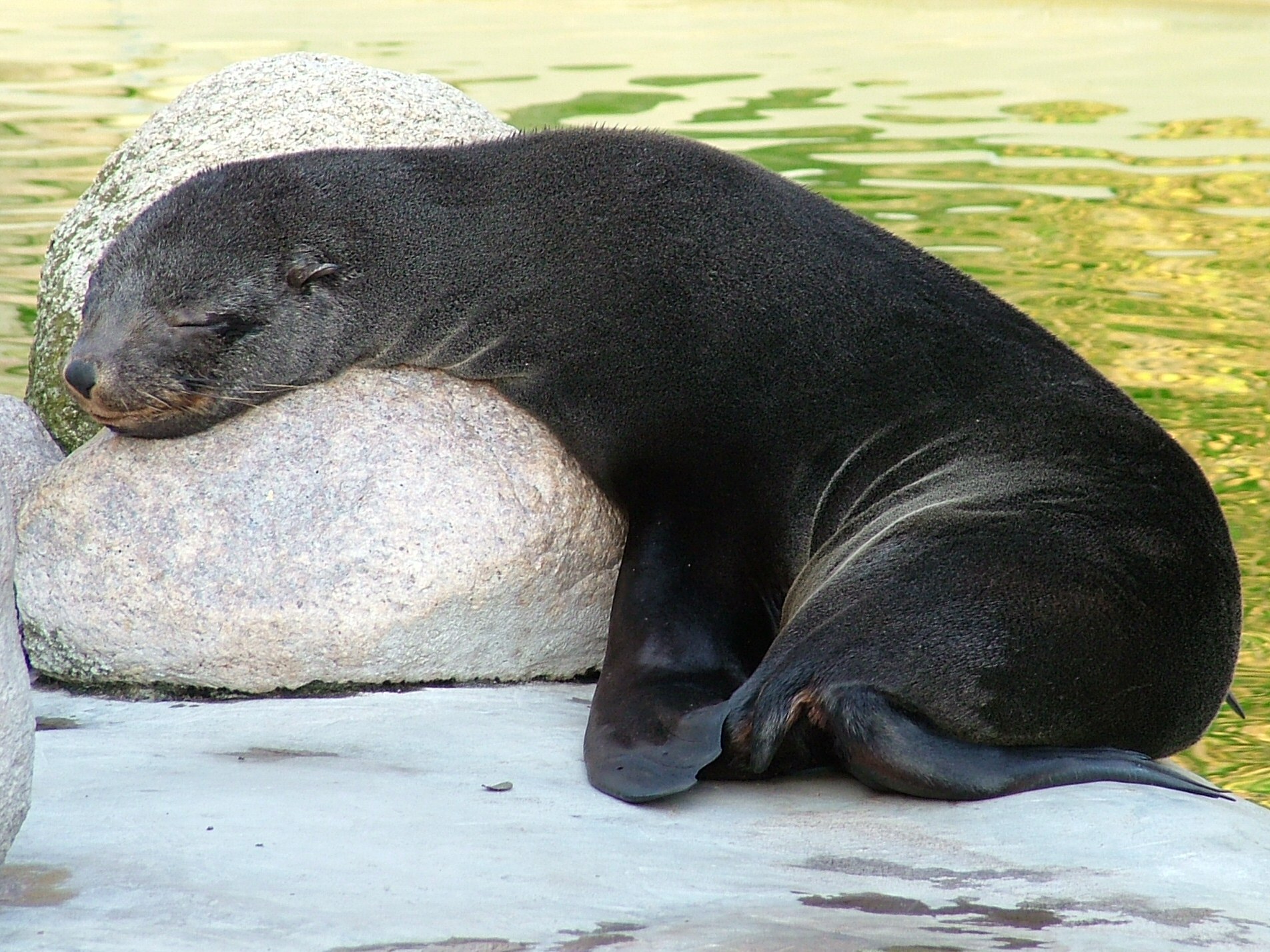 I love my sleep. Keep me from getting my usual 8 hours, and I am worthless the next day. And I’m not alone- when we routinely skip out on sleep, we become cognitively impaired and can put our health at risk. Other animals rely on sleep too. Most mammals and birds spend their nights moving between two types of sleep: slow wave sleep , and rapid eye movement (REM) sleep (the time at night when you dream). Mammals deprived of REM sleep have shown some pretty troubling physical symptoms. For example, after about a week of sleep deprivation, mice suffer from skin lesions, hypothermia, weight loss, and even possible death.

Yet, some marine mammals like whales and dolphins do not seem as reliant on sleep. In fact, scientists have never even recorded REM sleep in whales or dolphins! Instead, these marine mammals rest half their brain in a stage of slow wave sleep while the other hemisphere of their brain is active, switching which half of the brain is resting or active. This may allow whales and dolphins to continually regulate their breathing since they have to voluntarily take breaths at the surface (as opposed to humans and other land mammals that involuntarily breathe without having to constantly think about taking a breath). But this is just one hypothesis, and without knowing exactly what REM sleep does in mammals in the first place, scientists are not able to definitively explain why whales and dolphins can get along so well without it.

To unravel the mystery of REM sleep, scientists turned to a semi-aquatic mammal – the northern fur seal (Callorhinus ursinus). Northern fur seals spend most of their life at sea. When they come to land during the summer breeding season, the seals will alternate between staying on land for several days and going out to sea to forage for up to two weeks at a time. After the breeding season is done, the fur seals will spend about 10 months at sea completing a predominately solitary migration.

Scientists have been able to study the sleep patterns of fur seals by observing the habits of individuals in captivity. For this study, scientists monitored four individual seals in simulated environmental conditions in a tank to see how their sleep patterns changed on land versus out at sea. The scientists hooked electrodes up to the seals, allowing them to continuously measure their brain waves (electroencephalogram) from both halves (“hemispheres”) of their brain, heart rate (electrocardiogram), and eye (electrocculogram) and muscle (electromyogram) movement during the experiment. First, the seals were given access to a platform, which could be used to get out of the water, (to simulate land) for two days. Then, the water level was increased in the tank and the platform was removed to simulate being at sea. The seals were kept “at sea” for 10-14 days before the water level in the tank was lowered and the platform was returned to allow the seals access to “land”. During this entire timeline, the scientists observed how the seals slept.

While on land, the seals went through periods of both slow wave and REM sleep, averaging about 80 min of sleep a day. But while at sea, the fur seals did not go through much, if any, REM sleep cycles and averaged only 3 min of REM sleep a day. Instead, the seals transitioned into a mode of slow wave sleep similar to that seen in whales and dolphins- one hemisphere of their brain remained active while the other one rested. The seals only nodded off into REM sleep for very short periods of time. After only 10 days at sea, this reduction in REM sleep added up to over 12.8 fewer hours of REM sleep than the seal would have had during its normal sleep cycles on land. Overall, these seals lost way more REM sleep than the mice that were put through sleep deprivation studies mentioned earlier, and yet, the seals were fine!

After their 10-14 days at sea, the seals showed no physical signs of stress, weight or appetite loss, and acted completely normal. Most mammals subjected to sleep deprivation try to make up for their lost sleep afterwards (yes, exactly like you sleeping in on the weekends to make up for all those early workdays) so the scientists continued to monitor the seals’ sleep patterns for two days. The seals immediately transitioned back into their normal REM sleep cycle, resting both halves of their brain at the same time. While two of the seals spent far more time in REM sleep than they had prior to REM deprivation, it was nowhere near the level of recuperation typically required by mammals after losing out on REM sleep.

It makes sense that the seals would avoid REM sleep while at sea since, just like wales and dolphins, they need to stay at the surface and control their breathing. Dipping into a deeper REM sleep state could also spell disaster for these solitary seals if they are not alert enough to look for predators at all times. By resting only half of their brain at a time, the seals (as well as whales and dolphins) are able to continue swimming, stay more alert, and (literally) sleep with one eye open.

But the researchers think there may be another reason seals are able to forgo REM sleep without showing the typical negative side effects of sleep deprivation. They propose that REM sleep may be a way to warm up the brain stem after it has cooled down during slow wave sleep. It is possible that because the seals only rest half of their brain at a time while they are at sea, the other, active half of the brain is able to keep the brain stem warm enough; thereby preventing the need of a warming REM stage. The researchers, of course, will need to conduct further studies to prove if this is actually a major function of REM sleep and if the seals can retain brain heat sufficiently while only resting half of their brain at a time.  By studying how fur seals respond when switching between sleeping modes on land and at sea, researchers hope to discover the underlying purpose of REM sleep.