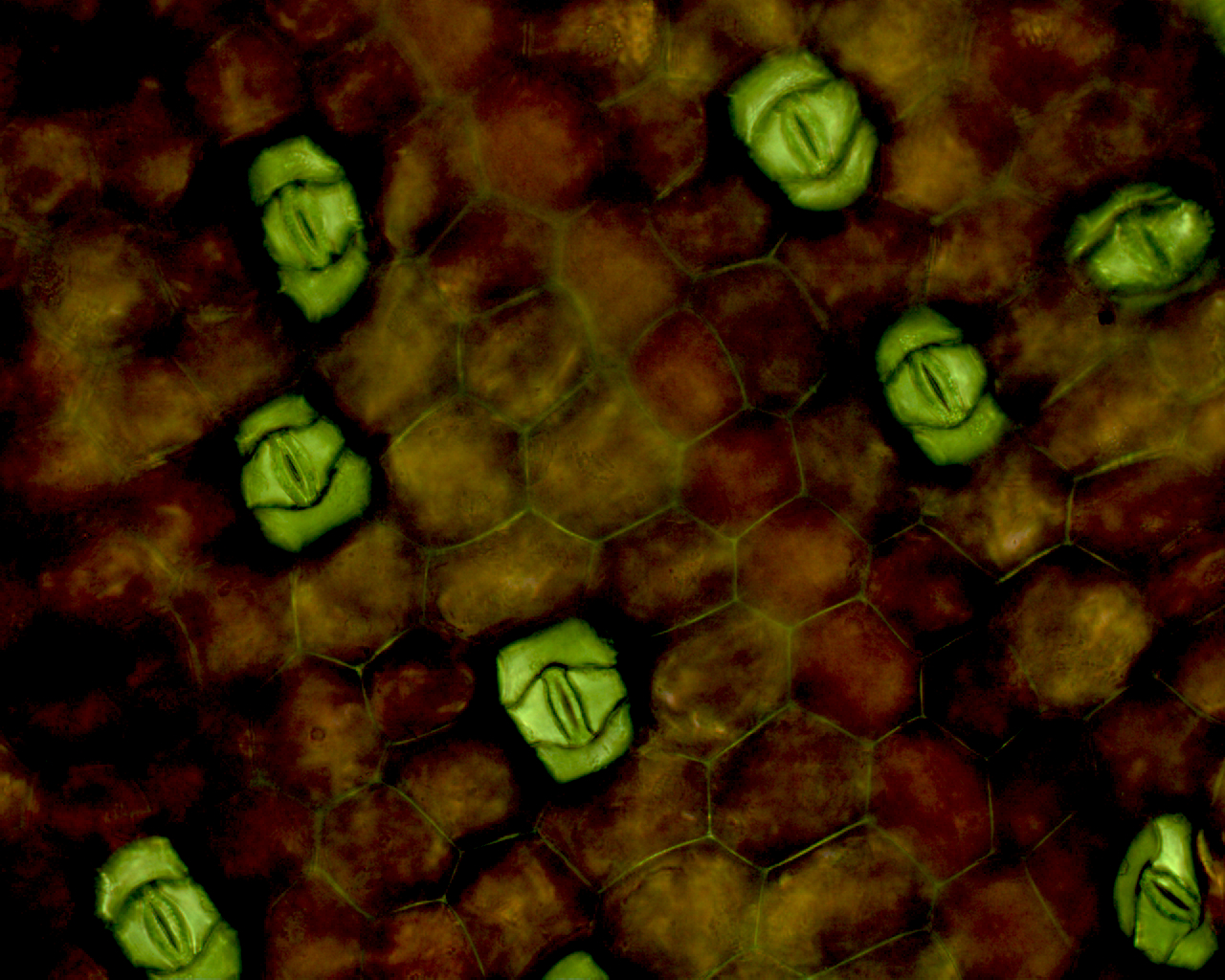 Tradeoffs in a changing world

Plants need three main ingredients to photosynthesize: air, water and light. But acquiring these resources poses a tradeoff. Plants take in air – more specifically, carbon dioxide, or CO2—through holes in their leaves, called stomata (Figure 1). When plants open their stomata, they lose water through these holes via evaporation. But plants need to keep their stomata open at some point to acquire the necessary CO2, so they settle into a happy medium where they can get just enough CO2 to photosynthesize while also minimizing water loss.

What happens as the amount of CO2 in the air increases? All of a sudden, plants are able to take in more CO2 than before without losing additional water. Do plants choose one extreme, taking in only the CO2 they need and reducing water loss as much as possible? Or do they accept the water loss in exchange for an even greater amount of CO2, turbocharging their photosynthetic rate as much as possible? This tradeoff is similar in cars: having a fuel efficient car is great, but its efficiency likely limits it in power; on the other hand, you could opt for a less fuel efficient car that achieves much higher horsepower. So which do plants choose? To be more efficient or to up their photosynthetic horsepower?

In short, Keeling and his colleagues’ results showed that plants are opting for a balance somewhere between being efficient and powerful. But the researchers came to this conclusion by focusing on another more subtle change that’s been occurring simultaneously: plants are becoming more selective in the carbon they take in, choosing more of the lighter carbon atoms from the air than before.

To understand the significance of this selectivity and how it relates to plant power and efficiency, it is first necessary to understand what a lighter carbon atom is and how it figures into photosynthesis. Atoms of the same element can have different weights depending on how many neutrons (neutrally-charged subatomic particles) each atom contains. Carbon exists primarily as two forms in nature: 13C (carbon atoms containing 13 neutrons), and the lighter, but less abundant 12C. Plants preferentially use CO2 molecules containing the lighter 12C isotope for several reasons. First, 12C diffuses more quickly through the stomata than the heavier 13C. Second, enzymes catalyzing the reactions that comprise photosynthesis also prefer the lighter isotope, which allows the reactions to proceed more quickly.

Why are plants becoming choosier? It turns out that isotopic discrimination and water use efficiency are related. There are two gatekeepers who choose between the isotopes: the stomata, and the enzymes involved in photosynthesis. When there’s more carbon in the atmosphere, more will be flowing through the stomata. This means that more carbon is reaching the enzymes, which get the chance to be even more selective for the lighter isotope. Some studies suggested that plants would choose to increase their water use efficiency, narrowing their stomata to allow the same amount of carbon in, meaning no change in isotopic choosiness. But this is not what Keeling and his colleagues saw; instead, they found that plants were taking up an even higher proportion of their preferred 12C than before.

Keeling and the researchers weren’t necessarily focusing on plants in the beginning. They were instead examining the ratio of 12C to 13C in the global atmosphere. When tracking the processes that influence atmospheric carbon isotopes, including fossil fuel burning and ocean-atmosphere CO2 exchange, the scientists found a gap between their modeled atmosphere and observations. No combination of uncertainties in any of their calculations could account for the discrepancy. Keeling and his colleagues recognized that there was some process they weren’t accounting for, and wondered whether the exchange of CO2 between the land and atmosphere (Figure 2) had something to do with it.

Using a combination of computational earth models, the researchers simulated scenarios in which plants were choosing to draw down the lighter carbon isotope more than they were before. They found that they could match the observed carbon isotope balance in the atmosphere if they increase the uptake of 12C by plants. Their finding is backed by tree core records, which show that plants indeed take in more 12C when the surrounding CO2 becomes more abundant.

Keeling and his collaborators’ findings were twofold: they were able to balance the global carbon isotope budget by accounting for this increased isotopic selectivity by plants. They also showed that when faced with increasing abundance of available CO­2 in the air and the option of choosing between efficiency and increased growth, plants choose to settle somewhere in between to optimize both. While it is promising to see that plants are using the changes in our climate to their advantage, many questions remain about what these changes mean for plants’ ability to sequester carbon, as well as about how plants will adapt as we reach even higher thresholds of atmospheric CO2 concentrations. Keeling and his collaborators’ findings are important additions to our understanding of how plants are adapting to climatic changes, and how our biosphere might operate in the future.