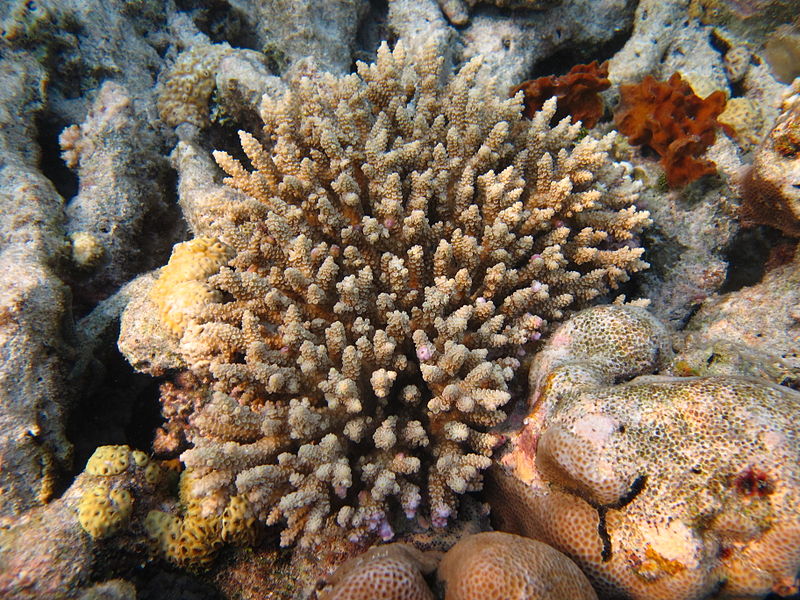 Coral Reefs are an important ecosystem in many shallow waters across the globe. Corals are animals that rely on phytoplankton, known as zooxanthellae, for sugars produced during photosynthesis. In return, coral hosts supply these “endosymbionts” with protection from predators. With warming and acidifying ocean conditions due to climate change, their future remains uncertain. There are many signs that a coral reef may be in trouble including, overgrowth of seaweeds (macroalgae), a film of bacteria growing over the coral, and coral bleaching. Coral bleaching occurs when the zooxanthellae that live within the coral host tissue are expelled due to inhospitable temperatures that compromise the symbiosis. If the symbiosis between the coral and zooxanthellae is not reestablished, the coral will starve.

Coral Bleaching has become much more prevalent in recent years, with approximately half of the Great Barrier Reef (GBR) lost to bleaching in 2016 & 2017 alone. Researchers have investigated the potential for corals and zooxanthellae to adapt to warming waters, but the general consensus is that most coral species won’t adapt in time to survive our current climate projections. More recently, scientists have begun studying the potential for assisted evolution in the lab. Coral and their zooxanthellae symbionts are brought into the lab and exposed to warmer temperatures more slowly than they would experience in our warming ocean. This slower rate of warming allows the fast-growing photosynthesizing symbiont to adapt over multiple generations. However, previously zooxanthellae adaptation to warmer conditions has not been reestablished in a coral host. Buerger and colleagues sought to reestablish this symbiosis and determine genes that might confer a tolerance to warmer ocean conditions.

As part of their research, Buerger et al. grew a population of Cladocopium goreaui, a coral symbiont, from a single organism and exposed the cultures to either the same temperature as their original environment (27ºC) or a gradual increase in temperature up to 31ºC across 4 years (see diagram from study). By slowly increasing the temperature cultures are exposed to, the Cladocopium goreaui have more time to adapt across generations. Cultures grown over 4 years at 27ºC were termed wild-type (WT) strains, while those grown at 31ºC were termed heat-adapted strains (SS). After 4 years, an experiment was started in which both the WT and SS cultures were exposed to 27ºC (ambient) and 31ºC (heat stressed) for three weeks. They were then measured for growth using the number of cells, their photosynthetic capacity, and their release of a reactive oxygen species (ROS). In coral reefs ROS are released by symbionts in stressful conditions and are shown to occur during coral bleaching. The strains grown at elevated temperatures over 4 years had higher numbers of cells and released less stress products when exposed to elevated temperatures in the experiment indicating these cultures were adapted to higher temperatures.

The next step was to expose these adapted symbionts to coral reef hosts to reestablish the symbiosis. Coral larvae were grown in tanks with each symbiont, either the heat-adapted strain (SS) or the wild type (WT) strain. After growing the coral with the symbionts for 10 weeks, coral were exposed to elevated temperatures (31 C) for one week. The WT symbionts performed similarly to most of the SS strains, except for three. Three heat-adapted symbionts were found to confer heat tolerance to their coral host. These three SS strains allowed their coral host to thrive in conditions it would otherwise not survive.

Finally, the researchers used molecular techniques to investigate how these thermally adapted symbionts might increase heat tolerance in their host. When organisms are exposed to new conditions they respond by up- or down-regulating genes in a process known as transcription. Researchers can take advantage of this process and measure gene regulation in response to varying conditions. Bueger et al. measured gene regulation of a heat-adapted symbiont that allowed it’s coral host to survive in warmer conditions. Gene regulation in the evolved symbiosis was compared to a wild-type (WT) symbiosis and two corals that did not have increased tolerance to warming from their heat adapted symbionts. The re-established heat adapted symbiosis saw up-regulation of the dark reactions in photosynthesis in the zooxanthallae, which have been shown to decrease during coral bleaching. The authors speculate these changes might contribute directly to decreased coral bleaching and increased thermal tolerance.

This study has shown photosynthetic coral symbionts can adapt to higher temperatures in the lab over the course of four years. The authors also show this tolerance can be conferred to the coral host, something that hasn’t been proven until this study. Finally, Buerger et al. go one step further in identifying important genes that might respond to increasing temperatures and help confer coral bleaching tolerance.

Studies like this show the potential for conservation through human-assisted coral adaptation. However, more research needs to be done on the long-term prevalence of these thermally adapted corals and their survival after introduction back into the environment. Overall, the research highlighted here is a promising path to coral conservation in the future.