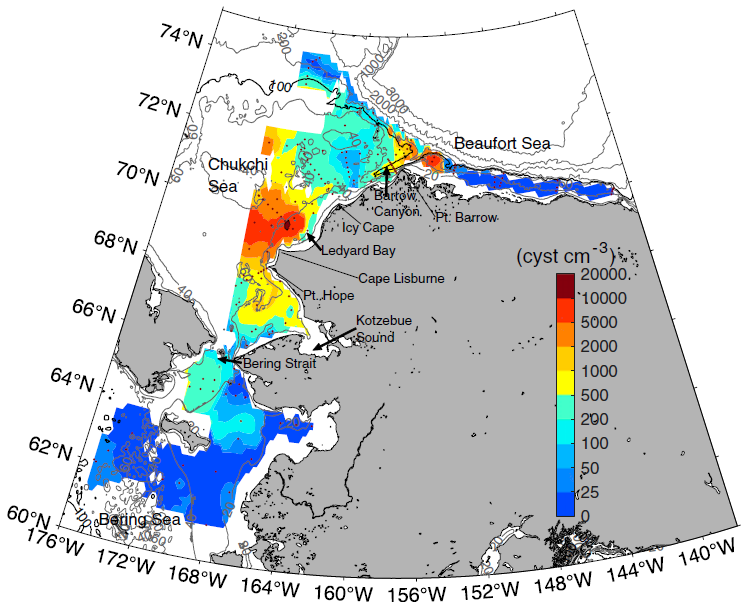 Climate change is a pervasive force in nature. Whether it is forcing animals to migrate further, killing off native plants in your hometown, or creating more dangerous weather patterns, it is easy to see its effects with our own eyes. One deadly effect of climate change are more frequently algal blooms. Algal blooms are large scale events where microscopic organisms called algae grow excessively in the water. Spurred on by warmer waters and lots of sunlight, these little creatures find their ideal conditions during the Summer months. Algal blooms can be dangerous as some of these algae produce harmful toxins for humans (otherwise known as Harmful Algal Blooms or HAB’s). It has become increasingly important for scientists to understand these blooms as they have become more frequent. This leads us to the question, can we study them more closely? Furthermore, as climate change warms waters, how will algal blooms change in the future?

An international team of scientists from the Woods Hole Oceanographic Institute in Massachusetts, the National Oceanographic and Atmospheric Administration, the University of Maryland, the University of Alaska Fairbanks, the State Oceanic Administration of China, and Hokkaido University in Japan investigated this question. The team studied the Arctic Ocean as climate change has been threateningly warming the waters of this part of the world. Previous studies have shown that new organisms are beginning to live in the Arctic Ocean as the waters warm, so the group studied how algae behave in this developing frontier. The team collected samples of both the water and the sediments to see how well the algae lived in this environment and where it specifically bloomed in the waters. So, today we are going to ask the question, what are algal blooms like in the Arctic?

The team found that a massive population of a type of algae called Alexandrium catenella has begun developing in the Arctic Ocean near the Bering strait! Specifically, the group found two large populations of the algae living dormant in the sediments, which could extend for close to 1000 kilometers along the coasts. These organisms would then germinate and move to the surface to bloom during August and September. Interestingly, the team found virtually no algae during November, so these blooms are very seasonally in tune. At some points during the bloom, there could be around 5000 algae cells per liter or 1.5 million cells fitting in your average bathtub! The majority of cells were found in water near the surface, which is frightening as the group notes that there is 10x more cells in the water than necessary for the water to be considered dangerous to swim during blooms. Furthermore, the group found that warmer waters helped the algae germinate faster, leading to the possibility of more severe blooms. Water from the North part of the Pacific Ocean flow into the Arctic Ocean through the Bering strait, bringing along warmer water. This leads the team to believe that warmer water will be brought in year after year, increasing algal bloom intensity and frequency.

First, samples of water from the Chukchi sea of the Arctic Ocean were captured for multiple years in a row and sediments from the same areas were collected as well. In addition, water conditions like temperature and salinity were measured to understand the environment the algae were blooming in. The team took these results and constructed maps of algae population and water properties to understand the connection between the two. To further analyze the behavior of the algae, the group performed small scale experiments in their own laboratory to study dynamics like the germination of the algae. With these efforts, the team could identify the connections between algal blooms and water conditions.

This investigation informs us of the staggering changes our oceans experience due to climate change. These conclusions let us know that the ocean is an incredibly complex environment where little changes in water conditions can cause large changes in where organisms live. With this knowledge, we can better anticipate how organisms respond to our changing climate.