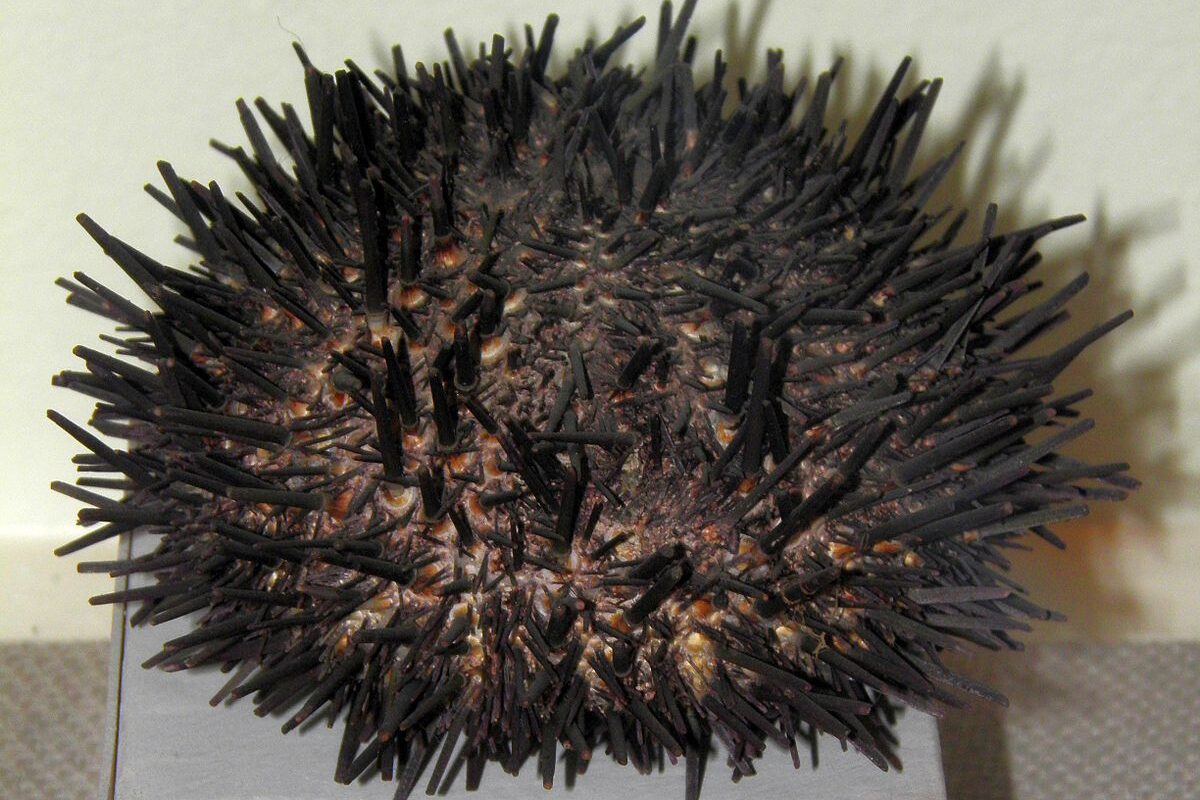 When most of us think of marine animals that are incredibly important to ecosystems, we tend to think of large, more “interesting” animals, like sharks or whales. However, most of the time, the animals at the bottom of the food chain have the biggest impact. Sea urchins, for instance, are small marine invertebrates that sit on sea floors across the globe, from shallow waters to the deep ocean. While they may just look like spikey paperweights, sea urchins can have profound, and sometimes very negative, impacts on their habitats.

Sea urchins will frequently eat kelp, and in the absence of urchin predators, they will completely decimate kelp forests, turning these lush landscapes into urchin barrens, where very little marine life can exist.

Kelp forests are an extremely important habitat – they provide nursery areas for fishes and provide our atmosphere with oxygen. In areas where sea urchins are overabundant and destroying kelp, conservationists and researchers have been looking for ways to curb their spread. Current methods for urchin removal have had mixed results. These methods can involve using chemical barriers, where compounds are dumped onto areas where urchins are unwanted to kill any urchins present and prevent new urchins from settling. This method can produce a lot of heat, and is typically not environmentally friendly. Other urchin removal methods utilize divers to physically remove urchin from landscapes, which is both time and labor intensive. Given these issues, researchers from Dalian Ocean University in China attempted to study a new way to combat sea urchins – by using the urchins themselves.

When sea urchins are killed or injured, they give off alarm cues, which are chemical signals that can warn other urchins when a threat is present. These cues cause other urchins in the area to move away from the injured individual, and so are an effective tool for urchin survival. The researchers took advantage of this fact by setting up trials in the laboratory where they exposed sea urchins to alarm cues in the presence of kelp to determine if these cues would deter urchins from eating kelp or cause them to escape the area. Urchin alarm cues are very easy to spot in the water, as they are pink in color, so researchers were able to easily extract the chemicals as the urchins released them in order to use them for experiments.

The results showed that alarm cues could be a promising strategy for keeping urchins away from kelp. If an urchin was on its way to a piece of kelp and was exposed to alarm cues, it was much less likely to continue moving towards the kelp. Covering the kelp itself in alarm cues caused the urchins to stay away from the kelp entirely. However, if the urchins themselves were first exposed to alarm cues, began to escape the area, and then found kelp on their escape route, they would often still stop for a meal.

What does all of this mean in terms of protecting kelp forests and stopping the spread of urchin barrens? It gives scientists and conservationists some hope that alarm cues could be a useful urchin control method if applied properly. If kelp itself is covered in alarm cues, or the surrounding area contains alarm cues, then sea urchins will be much less likely to go near and munch on kelp. However, spraying alarm cues on the urchins themselves is unlikely to be helpful, as that did not stop them from eating nearby kelp in these experiments.

Now that the validity of this sea urchin control method has been shown with this study, work can be done to put it into practice in actual kelp forests. The largest hurdle to this will be to figure out how to synthesize sea urchin alarm cues in the lab, because injuring or killing sea urchins on a large scale would be extremely time and labor intensive. Learning more about the chemical make-up of these alarm cues is likely the next step for future study, as well as devoting more resources to protecting and growing kelp forests around the world.

For information on one kelp forest conservation project, you can check out The Bay Foundation’s Kelp Forest Restoration Project here. To read more about the relationship between urchins and kelp, you can check out a previous oceanbites post here!

One thought on “Urchin Unease: Can cues from fellow urchins curb these invertebrates’ appetites?”