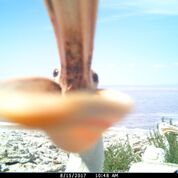 The amazing life of the Great Salt Lake

“Does anything live in the Great Salt Lake?”

Quite often, when I encounter opportunities to tell people about my research, I emphasize that LOTS of organisms live in the Great Salt Lake (GSL), Utah. Covering 1700 square miles, the GSL boasts habitats ranging from freshwater wetlands to hypersaline bays that attract millions of birds each year.

Many of these birds, including American White Pelicans, frequent coastal marine areas such as the Gulf of Mexico, but they come to the GSL to forage and breed. Additionally, the GSL has long been the subject of intensive studies that have helped direct sustainable harvesting practices. This remarkable inland sea is an important bird oasis, but human activities are threatening this unique ecosystem.

Brine shrimp by the billions – for birds and industry

While the GSL is too salty for fish, the humble brine shrimp (Artemia franciscana) thrives there, numbering in the billions. This tiny shrimp is critical to the survival of Eared Grebes, a migratory bird species that spends the summer and fall on the GSL.

Here they breed and feast on brine shrimp before flying to the Gulf of California for the winter. Research by Conover and Caudell (2008) showed that an individual Eared Grebe must consume around 24,000 brine shrimp each day in order to meet daily energy requirements! That’s a lot of shrimp for one bird. Given that nearly 5 million Eared Grebes settle at the GSL for several months, monitoring the brine shrimp populations in the lake is critical to ensure that there is enough to support the birds.

Much more than the salty brines

In addition to the salty waters churning with brine shrimp and hungry Eared Grebes, the GSL includes an expansive network of wetlands that are located near freshwater rivers. These shallow wetlands have high nutrient levels thanks to river input, which promote aquatic plant growth and support abundant invertebrates and fish. Invertebrates and fish, in turn, support millions of migratory birds. Additionally, as melting snow from the mountains flow into the wetlands, water levels change across the system, allowing many different species of plants to grow and thrive.

The American White Pelican (pelican for short) depends on the GSL’s freshwater wetlands and bays for food. That’s right, pelicans are abundant on the GSL, and they even have their very own nesting island, Gunnison Island, in the north part of the lake.

While pelicans can be spotted along the coasts of California and the Gulf of Mexico, they depend on the GSL to eat and mate. Why don’t the pelicans just stay near the coasts? Aren’t there enough resources there for them? Unlike many aquatic birds, pelicans cannot dive for food; they depend on shallow lakes where they can “herd” fish such as carp and suckers. After gathering fish, they carry their prey back to Gunnison Island, where they feed their chicks.

Researchers at the Great Salt Lake Institute (GSLI) at Westminster College in Salt Lake City, Utah partnered with UDWR to study their migration patterns; check out where some of the pelicans are today! Today, the GSL has one of the largest breeding colonies of pelicans in North America, making it essential for the survival of the species.

According to Jaimi Butler, coordinator of the GSLI, pelicans are a success story. Their populations declined during the 19th and early 20th century because of habitat loss, pesticide contaminants such as DDT, and outright human persecution due to perceived competition with humans for valuable fish species. Right now, after making a big comeback, pelican populations are stable. However, their future stability is not guaranteed, as many inland saline lakes in the western U.S. and around the world are disappearing.

Like other saline lakes, the GSL is threatened by human activities that alter the delicate balance of the ecosystem to the detriment of birds. Thanks to water diversions and climate change, the Great Salt Lake is slowly getting smaller.

Each year, around 40% of water flowing into the GSL is diverted for agriculture and other uses. In fact, 2016 marked the lowest water levels in GSL’s recorded history. Additionally, mineral extraction industries on the lake can introduce toxins into the food web. Within the context of a changing ecosystem, these charismatic pelicans may become the symbolic polar bears of the GSL. As water continues to be diverted and lake levels are lowered, pelicans will have to work harder to find food, much like the polar bears losing their footing in the arctic.

Why does this all matter? The GSL is tied to a much greater network of ecosystems, mainly through the millions of migratory bird species that visit GSL have migration routes that span across countries and continents. The GSL is a critical stopping point for birds, and as inland saline lakes continue to be degraded, it is imperative to protect this ecosystem and others like it.

Conover, M.R., and J.N. Caudell.  2008.  Energy budgets for eared grebes on the Great Salt Lake and implications for harvest of brine shrimp. Journal of Wildlife Management 73:1134-1139.