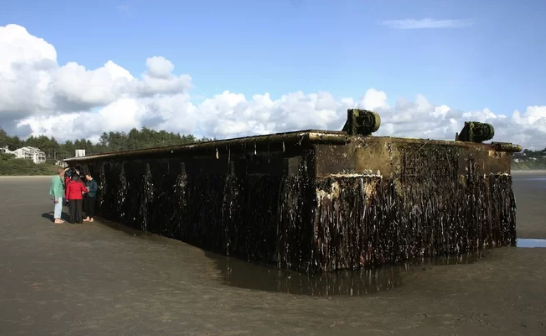 On March 11, 2001, a magnitude 9.0 earthquake took Japan by surprise and caused a tsunami that flooded a majority of the country. Unfortunately, the flooding sent tons of debris into the ocean. Once the debris entered the ocean, the currents grabbed ahold and eventually some of the debris reached land on the other side of the Pacific. Even 7 years later, the debris continues to make its way to various places along the North American Pacific Coast. Small marine organisms attached to the debris make their way across the ocean by a process called rafting. Similar to the way you might go rafting down a river on top of a tube, these small organisms stick to the debris and use it as a way to traverse the Pacific Ocean. Once the debris makes it to land, the organisms could potentially establish themselves in a new environment and become an invasive species, or non-native species. Invasive species can cause ecological and economic destruction. For instance, it is estimated that globally, invasive species cost billions of dollars by impacting fish aquaculture. In addition, they can be considered the second greatest threat to native biodiversity. Therefore, it is necessary to identify potential non-native species associated with tsunami debris that could pose a risk to Pacific North America and Hawaii.

In this study, scientists sampled 600 organisms from various debris landings between 2012 and 2016 along 5 different regions. They started in 2012 because this is when a majority of debris showed up on the shores of North America. Scientists used a risk-scoring guide to quantify both the amount of tsunami debris and risk factor of organisms transported. The risk- scoring guide provides a way to quickly screen and rank different organisms based on a series of 17 questions. The questions help scientists determine if certain species are more likely to become invasive, and screening is centered on 4 factors of the invasion process:  (1) arrival (to the new environment), (2) survival, (3) establishment (how easy it is for the organism to “set up its new home”), and (4) spread and impact on native organisms. Based on the answers to the questions, each species receives a score for the “Likelihood of Invasion” and the “Impact of Invasion.” Instead of conducting time and data intensive quantitative analyses, the risk-scoring scheme provides invasive species managers quick results that can help inform which species are likely cause a larger impact on the local environment.

So you get some scores, now what?

Organisms rafting over on tsunami debris range from low to high risk. Scientists compare the likelihood of invasion and impact of invasion scores to determine high-risk species. Higher risk organisms (scores of 6-9) are well-known global invaders, such as the Mediterranean mussel and the Carpet sea squirt. The high-risk species are in the upper right corner of each graph. This highlights the large number of high-risk species coming over from Japanese tsunami debris. Hawaii has the highest cumulative risk because most of the organisms coming over on debris have not previously been found on the islands. On the other hand, the Oregon, Washington and Vancouver Coast region has the lowest cumulative risk due to the fewer number of Japanese associated organisms. While the scoring system helps determine the risk of organisms invading the 5 different regions, certain species could have received larger scores than actually deserved because there are gaps in historical invasion data. Generally however, this scoring system works well because it enables scientists to have a quick turn around for data, which is then used for invasive species management.

Implications for the environment

The rafting of organisms on marine debris has occurred for millions of years. Historically, rafting occurred primarily on natural debris from land, such as logs, which break down over time. However, human activity has increased the amount of man-made debris in the ocean, which can take thousands of years to break down. A larger amount of man-made material in the ocean means that there will be more opportunities for organisms to become invasive if they end up in their non-native habitat. When the same organisms are introduced to an area multiple times, there is increased genetic diversity. This increased diversity improves organisms’ tolerance to environmental changes, and thus increases the chance of invasion success. Applying the risk score method in this study confirmed the presence of high-risk non-native species on tsunami debris. Two of the recorded species are considered the world’s worst invasive species. Therefore, monitoring the arrival of organisms that have the capacity to become invasive is important for years to come.