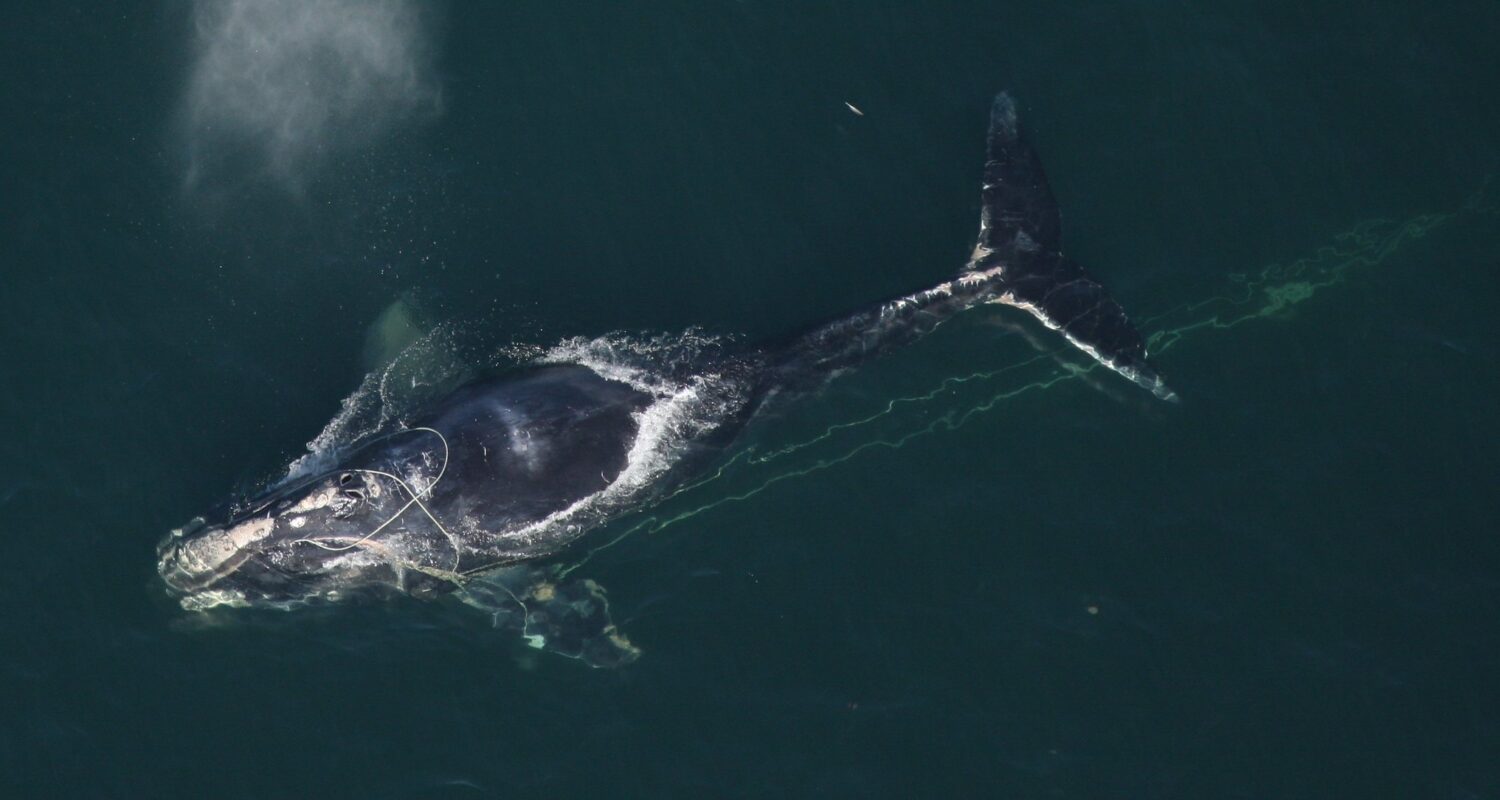 The plight of the right whale

With fewer than 400 individuals left on the planet, the situation for North Atlantic right whales is dire. These cosmopolitan giants inhabit waters along the east coast of the United States and Canada, making them easy to study and observe but also prone to injury and mortality. Some of the greatest threats to North Atlantic right whales are vessel collisions and fishing gear entanglements, which frequently occur because of the overlap of major shipping routes and fisheries with right whale habitats.

The many impacts of human activity on right whales have impeded the recovery of the species from whaling. Right whales were nearly hunted to extinction before bans on commercial whaling were enacted in the 20th century. In fact, the common name we use for these whales exists because whalers referred to them as the “right whale” to hunt. Now that they are no longer directly targeted and killed, North Atlantic right whales still face both the lethal and sublethal effects of human activities. Sublethal impacts may not result in mortality, but can affect the life history of individual animals, which in turn can have consequences for the population as a whole.

In a recent study published in the journal Current Biology, scientists used images captured from airplanes and drones to measure right whale body lengths. A combination of measured body lengths and known individual ages allows for the creation of models of whale growth, which can be compared across individuals born in different years and with different entanglement histories to investigate if and how growth might be stunted.

The small and continually decreasing population size of North Atlantic right whales is a cause for concern, but it also allows for detailed studies that aren’t possible for other species with more individuals. Since 1980, scientists have maintained a thorough catalogue of right whale individuals; right whales are photographed, named, and their life history, family tree, and previous injuries are all recorded.

The team of scientists used 202 length measurements from 129 individual whales to build their growth models and study the effects of variables like whether the whale has been entangled, whether the whale’s mother was entangled, and what year the whale was born. From these models, they estimated that a whale born in 2019 was likely to be 1 m shorter when fully grown than a whale born in 1981, which is a 7% decrease in body length. If a whale’s mother was entangled during nursing, or if the whale itself was entangled, its maximum length was likely to be about 0.7 m (about 5%) shorter than a whale who was not entangled and whose mother had not been entangled.

Stunted growth from entanglement doesn’t entirely explain the decrease in body size of whales born since 1981. Although entanglements have increased over the past 40 years, this is not the only reason right whales are getting smaller. The authors of this paper suggest that other sublethal impacts, like the changing distributions of the plankton that right whales feed on or feeding disruptions from ship traffic, along with entanglements that have gone unrecorded could combine to stunt right whale growth. Decreasing body size of females could also lead to the birth of smaller and smaller calves – a feedback loop induced by the deteriorating body conditions of North Atlantic right whales.

As we work to protect endangered species like the North Atlantic right whale, studies of the sublethal impacts of human activity highlight the need to address conservation issues from multiple angles. Multiple facets of human activity affect animal survival and wellbeing on both immediate and long-term time scales. Entanglements, ship strikes, and even prolonged changes in body condition can have generational and population-wide consequences.

Some policies have already been put in place to work on mitigating these impacts to North Atlantic right whales. For example, speed restrictions and seasonal closures have been implemented when right whales are present in areas along the US East Coast in an effort to reduce the risk of ship strikes. And to limit risk of entanglement, there are seasonal closures to fisheries in right whale habitats as well as efforts to develop new fishing gear that is less likely to entangle a whale. There are many teams of people working to protect right whales and inform the public of their plight, and these actions and more are critical to the survival of the species.

2 thoughts on “North Atlantic right whales are getting smaller”