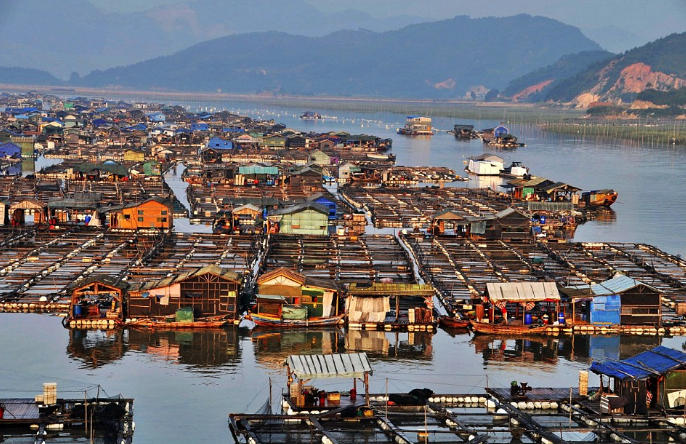 China on the global seafood stage

On average, about 17% of animal protein consumed globally comes from seafood. In 2016, China’s seafood production reached 171 million metric tons! There is a huge demand for seafood and it continues to grow. Nations such as Japan, Malaysia, Vietnam and Thailand that rely on seafood need to figure out how to meet this demand.

Different countries have different methods for producing seafood—some countries rely on capturing fish in the wild and others implement aquaculture, or fish farming. Among these countries, China produces the most seafood by both fishing and farming fish and exports a lot of it to other nations. China plans to implement large-scale fisheries management reform and quota-based domestic fisheries management in the future.

A recent study, published in PloS ONE, examined the costs, benefits and risks of China’s seafood production strategies that are built around intense exploitation of the ocean to seewhat has and has not worked for China in the past.

How did the authors carry out this study?

The primary source of data was the Chinese Fisheries Statistics Yearbook. In this yearbook, data are collected via reporting forms filled out by officials at the village or town level. Once all data are compiled, they are entered into a database at the Bureau of Fisheries at the Ministry of Agriculture and published annually. The authors identified differences in the trends in seafood production over time by species or group over time using computer programs to predict how fish numbers change over time.

Chinese fishery data have often been questioned in the scientific literature because of high fish estimates from over-reporting of catch data. A possible explanation for China’s high reported catches involves changes in trophic dynamics, or the way the marine food web is structured, as a result of intense fishing. In fact, China’s catch composition has changed from longer-lived, slower growing fish species to shorter-lived, faster growing species which is a direct outcome from indiscriminate, intense fishing.

Even though China has attempted to gather comprehensive fishery catch statistics, there are still issues. These fish are caught by one of the world’s most powerful fleet, so policing and observing catch from the entire fleet is an extremely difficult task. If there are many thousands of fishing boats, how can one be sure that they are reporting the correct statistics? The authors claim that they believe the official fishery data from China but one should be skeptical about these data due to potential reporting issues.

The authors found that China’s fishing fleets fish primarily with gear such as trawl nets that are dragged behind the boat to collect fish, and gillnets that are suspended vertically in the water and can fish for days or even weeks!

These nets are used in distant water fishing, or fishing far off the coast. There are reports that Chinese vessels have been observed fishing in the exclusive economic zones (EEZ) of 93 coastal countries. These EEZs are where maritime countries have special rights regarding the use of ocean resources in their region—this is a little concerning because it could be seen as taking advantage of smaller coastal nations. However, a potential positive outcome of fishing in other countries’ EEZs is that these other countries could benefit from China’s fishing efforts instead of building their own fishing fleets. Of course, there needs to be regulatory practices in place so there are agreements between China and other maritime countries.

Another result from this study is that China’s fish farming techniques, have shifted from the environmentally disruptive monoculturing of growing one species at a time to polyculture systems, where fed species. such as fish and crustaceans, are farmed in close proximity to non-fed species like bivalves and seaweeds. Those non-fed species can filter and reduce waste from the fed species. This is a beneficial switch in China’s fish farming practices because of less waste generation.

Lastly, the authors found that fish farming affects natural fisheries. Fish farms can attract wild fish by providing structure and food to natural populations. In addition, farms may further change the make-up of fish communities by changing habitat resources or impacting what species of baby fish decide to grow in a particular region. China is also enhancing the harvested fish populations by adding fish that were grown in captivity to the wild and constructing artificial reefs to offer more habitat to larval fish. Over 7.8 billion larvae were added to the wild in 2016—that’s a lot of baby fish!

China’s marine seafood production strategies provide one of the world’s largest examples of the predicted tradeoff between seafood production and preserving the environment. There are three benefits to intense capture and cultivation of fish in China: 1) high yields, 2) high employment and 3) low management costs. The downside to this way of producing seafood is overfishing.

Intense fishing currently appears to be a viable strategy in China because a domestic market exists for nearly all species and size of fish, unlike many other seafood markets around the world where a large portion of catches is discarded. A major focus of China’s most recent 5 year plan is to improve the ecological conditions of their oceans.

China’s 2020 goals are to decrease catches from wild capture fisheries to 10 million tons, eliminate 40% of government fisheries subsidies and reduce the fishing fleet by 20,000 vessels. A major focus for these goals will be improved monitoring and enforcement for large fishing fleets and aquaculture systems. The successful development of these methods could be useful for other countries facing pressure to both protect the environment and maintain seafood production.

One thought on “To fish or not to fish: Exploring China’s seafood production strategies”