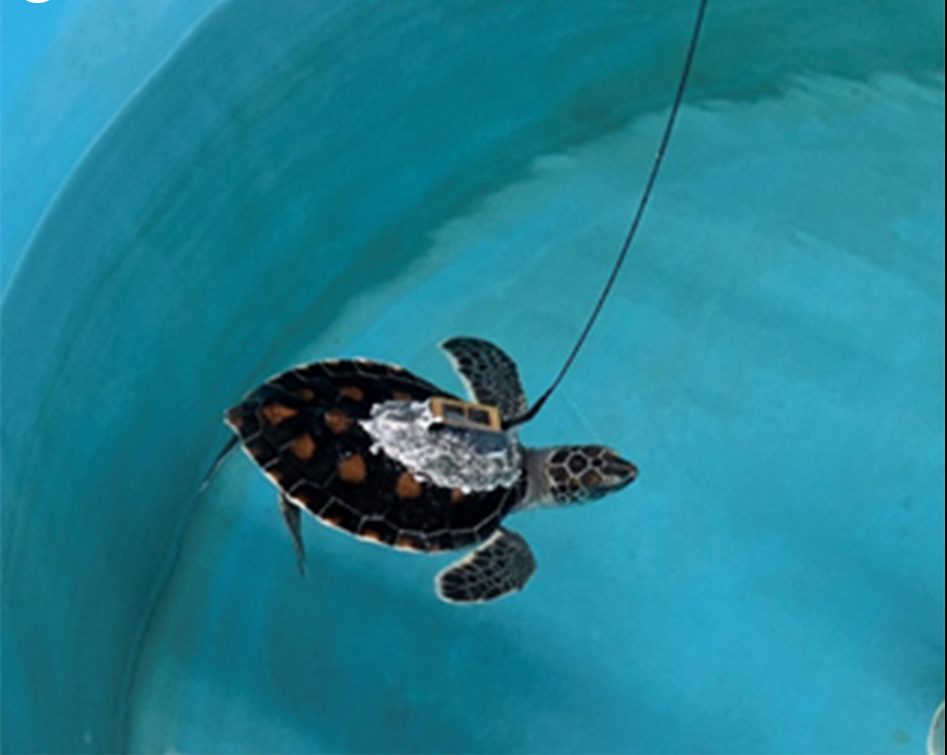 Beneath the light of the moon, a hundred baby sea turtles burst from the sand where they hatched from their eggs. Waving their limbs about, these tiny creatures make their way towards the water, where they can find safety amidst the waves. Once underwater, these little turtles swim through the shallow, coastal waters, away from land. But where do they go next?

For years, scientists have tried to answer this question. Researchers and beachgoers alike have marveled at sea turtles hatching on the beach and swimming out into coastal waters. But where exactly these baby sea turtles go to grow and develop has been a mystery, leading this life stage to be termed “the lost years” by some scientists.

Previous research has led to educated guesses about the life and habitats of juvenile sea turtles, but no explicit observations of their movement patterns have been made. It is important to understanding where animals, like sea turtles, go at different life stages for conservation efforts; it’s impossible to protect an animal if you don’t know where to go to protect it.

Now, thanks to advancements in animal-borne tracking technology, scientists can monitor the movements and behavior of marine animals, from whales and sharks to seabirds and itty bitty turtle hatchlings.

In a recent paper led by Dr. Katherine Mansfield, a research team developed a new method for attaching solar-powered tags to the shells of green sea turtle hatchlings so that the tags would stay on for at least a few months, transmitting GPS coordinates and other information back to the lab via satellite. Their method involves careful cleaning of a turtle’s shell before using store-bought marine adhesives to carefully secure a tag which was originally intended for use with seabirds.

Life in the weeds

Baby sea turtles love brown seaweed, known scientifically as sargassum. Drifting amongst mats of sargassum provides hatchlings with lots of food and a warm, safe place to hide. Sargassum drifts about in the North Atlantic Ocean, accumulating at the center of four major currents, forming a region known as the Sargasso Sea. Unlike other seas, the Sargasso Sea is not formed by surrounding land masses and is instead named for the mass of seaweed that swirls around in the gyre created by the surrounding currents. A variety of organisms, like fish, crabs, and shrimp, also call this region home, and it is especially important for other juvenile animals as well.

Many of the tagged sea turtle hatchlings made their way to the Sargasso Sea, where their tags eventually fell off. This was contrary to prior hypotheses, which considered the Sargasso Sea important for these turtles but which described juvenile turtle movement as restricted to areas within the currents surrounding the sea.

It appears that the Sargasso Sea is an important nursery habitat for both green sea turtles and loggerhead sea turtles, which were similarly tracked with satellite tags in a previous study. This detailed information about the migratory routes and destinations of juvenile turtles across species raises questions about turtle behavior and emphasizes the importance of protecting this key habitat.