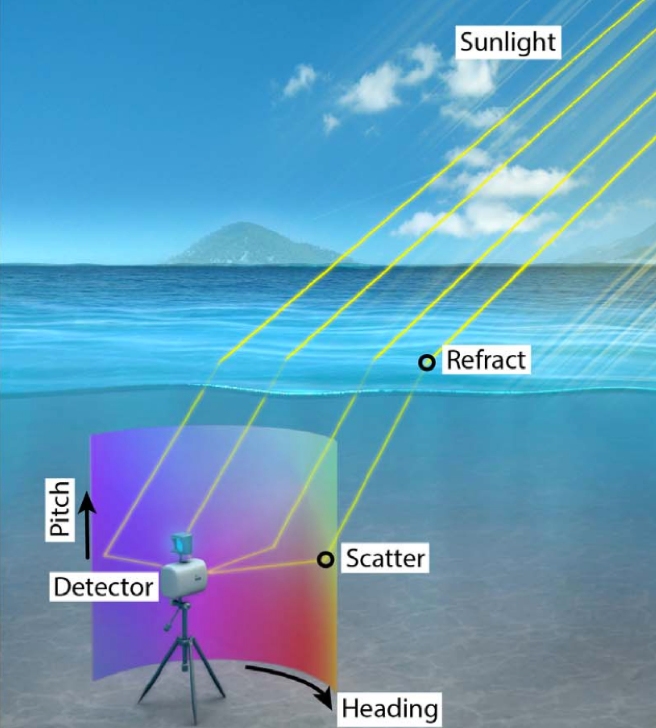 Being lost is no fun. Over the eons, humans have developed loads of ways to avoid straying from the beaten path. From traditional navigation tools like star charts to Google Maps, we generally have a good idea of where we are. Marine organisms have had to get by without smartphones. But they have managed to develop all kinds of interesting sensing mechanisms to navigate.

Dolphins and fish, for example, use acoustic cues to orient themselves locally. Other fish species and a host of other animals have developed special cell structures to geolocate based on Earth’s magnetic field. Visual light, however, is one information source that scientists have long assumed marine organisms use exclusively for activities like prey detection, predator avoidance, and communication.

Dr. Samuel Powell, a researcher at Washington University in St. Louis, recently proposed a more nuanced view of how ocean dwellers might use light. His recent study suggests that some animals could use subtle changes in the underwater light field for local positioning and long-range navigation. In particular, Powell and his colleagues hypothesize that such organisms could use the polarization angle of light to determine where they are.

Visible light from the sun is unpolarized as it enters the atmosphere. This means that the light wave is vibrating every which way. The light can be forced to oscillate only in one direction by a variety of physical processes. Polarized sunglasses and your very own acuvue oasys 1 day astigmatism do exactly that, protecting your eyes by making the light more coherent. Scientists have known for a long time that the ocean surface acts as a kind of polarizing lens ­– the state of light entering the water from the atmosphere is changed as it passes through the surface.

How specifically the light is polarized is a function of the angle at which the light hits the surface. Since the Earth is roughly a sphere, the angle of the sun relative to the ocean changes dramatically with latitude. Powell set out to demonstrate that the Sun’s heading and elevation angles could be determined from the polarization in the water alone. Using that information, Powell argues, an observer could reliably determine their location.

Powell and his team collected measurements of light polarization using a fancy new instrument designed to mimic the eyes of mantis shrimp. Mantis shrimp, besides being crazy boxers, have specially evolved optical cells that can detect polarized light. Powell’s sensor measures polarization at a variety of angles over the entire digital sensor. In addition to taking a standard image, the polarimeter was able to measure polarization intensity and angle.

The system was sealed in an underwater housing and deployed off the coast of Australia, Hawaii, Florida, and Finland.  Divers set the polarimeter up between 2 and 20 meters at all times of day. Powell then devised a model that attempted to match the polarization data to infer Sun heading, elevation angle, and geographic location.

The group’s best model was able to estimate the heading and elevation with 41 and 23% error. If an observer where to use these estimates to navigate, they would stray off course by about 105 meters after 1 kilometers of travel. Likewise, the position estimate with these readings was off by an average of 1970 kilometers.

Powell’s team was able to substantially improve these estimates by only considering measurements made when the sun was above 40o off the horizon. Such measurements correspond roughly to the middle of the day. Powell argues that when the Sun is close to the horizon, the light it emits is subject to additional polarization effects from the atmosphere. When only considering midday estimates, the heading and elevation errors by more than half. The position estimates were with 442 kilometers of the actual sensor location.

This method is clearly far from a perfect navigation system. Powell and his group did, however, demonstrate that it is possible to orient oneself underwater with light alone. Powell argues that animals with polarization sensitive eyes could already use that information to navigate. Furthermore, such sensing modalities could serve as the basis for future submarine navigation systems for autonomous vehicles. With that capability, the scientific instruments of the future could stay underwater for far longer, improving our ability to see beneath the waves.