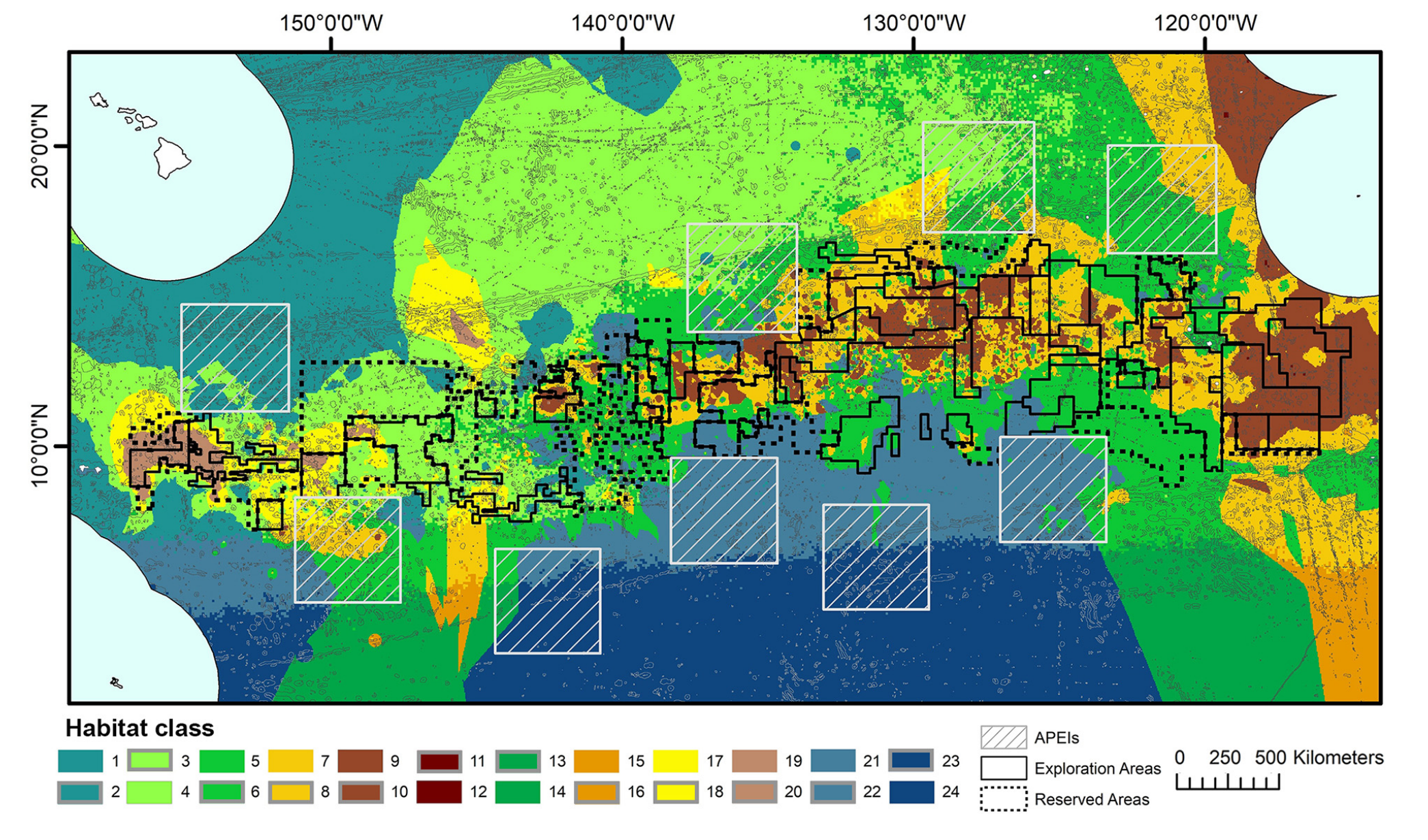 The deep sea: the final frontier

Modern life has catapulted our technological demands globally – between 1995 and 2020, 61.6% of the world’s population has started using the internet! Parallel to this trend is the demand for raw metals to make the cellphones and laptops we now rely on. Many of these metals (nickel, cobalt, copper, lithium, etc.) have depleted reservoirs on land or remain inaccessible, thus making exploratory efforts highly profitable. One such frontier is the deep seafloor where a type of rock, referred to as nodules, contains high concentrations of these economically valuable metals and occurs in high densities across the seafloor. The first targeted efforts to exploit nodules will likely happen in the Clarion-Clipperton Zone (CCZ), a nearly 7 million square kilometer area (roughly the size of 80% of the continental U.S.) located in the eastern central Pacific.

The scale of deep-sea mining is huge! As of 2020, 30 contracts have been established within the CCZ for exploration, totaling 1.5 million km2, and scientists say we could expect about 22.5% – 50% of the CCZ to be permanently altered in the 50-75 years after mining commences. Mining impacts will directly kill or indirectly harm many animals through the physical removal of nodules and surrounding sediments, or by the large cloud of sediment (2-4x the size of the mined seafloor) that will be stirred up and may persist for centuries. The deep sea is considered such a stable environment that the animals who live here are likely poorly, or not at all, adapted for rapid and major ecosystem change as is expected from deep-sea mining.

For more on the who, what, when, where, why of deep-sea mining, check out this previously written Oceanbites article.

What’s the big deal? The deep sea is a barren landscape, right? Wrong! Research over the last decade has altered our perception showing that the deep sea is home to hotspots of biodiversity and many novel species. To see footage of the weird and wonderful, check out this video from researchers at the University of Hawai’i at Manoa who specialize in describing the diversity in the CCZ. In fact, at least 50% of species documented thus far in the CCZ were previously described!

In most other ecosystems, it is easier to acquire information about who lives in the habitat, where to find them, and what features are important for their survival. Because of this, creating designated protected areas is relatively straightforward. However, this approach is not possible in the CCZ, as only 0.1% of the region has been studied to date. So, how do we protect the animals living on the deep seafloor if we don’t know even who lives there?

As a first pass effort to safeguard biodiversity, scientists proposed to space areas with no mining across the CCZ forming a marine protected area network (MPA). The legally adopted MPA network was altered to accommodate mining claims leaving questions as to if the MPA network actually protects the diversity of the CCZ.

Researchers based out of the UK, McQuid et al., aimed to evaluate the effectiveness of the MPA network in the CCZ by using an approach called habitat classification mapping. This approach uses environmental data including topography (i.e., seafloor features such as small hills, ditches, or seamounts), nodule abundance, and organic matter flux (i.e., how much food is available in the deep sea). These types of environmental data are readily available, abundant, and have been identified as important factors of species diversity and distribution. This association allows scientists to confidently use environmental data to predict unique habitats that would likely support biodiversity based on a site’s particular combination of environmental variables. The resulting habitat types were then layered over the CCZ to visualize the occurrence of each across the CCZ and how well represented it was within the MPA network. 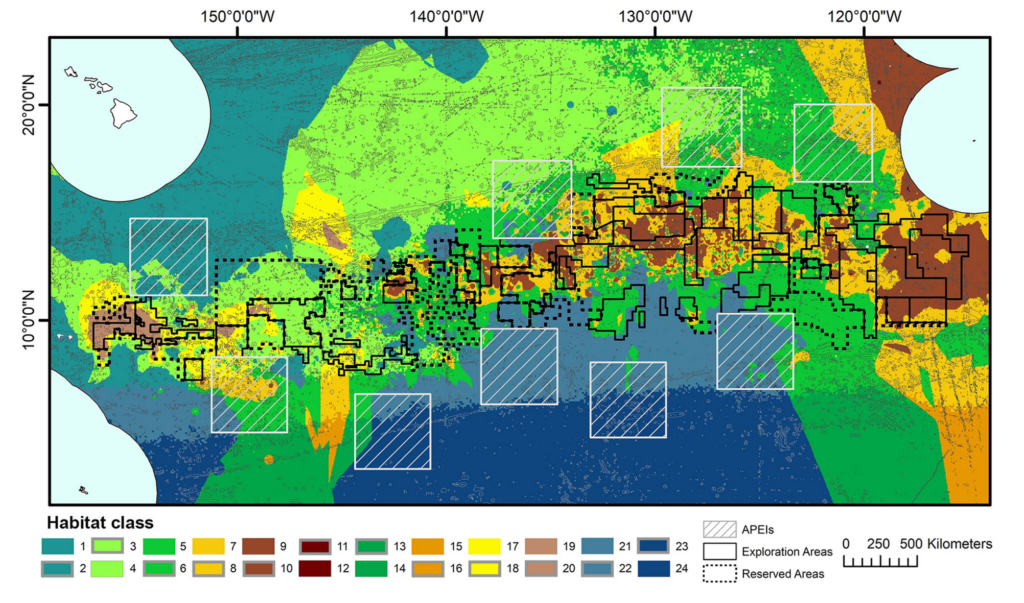 In the final habitat map produced by McQuid et al. 24 unique habitat classes are proposed in the CCZ, each expected to have distinct biological communities. Can you tell which habitats are missed in the protected areas (white hatches) and which seem at risk from mining (black shapes)? Figure courtesy of McQuid et al. 2020.

What information lies within and between the layers?

The lack of habitat representation within the MPA network suggests that the current measures are unlikely to protect the species that would be impacted by mining. If these habitat types are left unprotected, huge biodiversity loss could be expected from the CCZ. The researchers use this information to propose the inclusion of habitats that have poor representation in the current MPA network by creating additional protected areas within the swath of mining claim areas or within the unmanaged, outer area of the CCZ, both of which are comprised of large continuous areas of the severely underrepresented habitat types. This work has now resulted in discussions currently underway with legislative bodies on how to refine the MPA network in the CCZ to include these important habitat types!