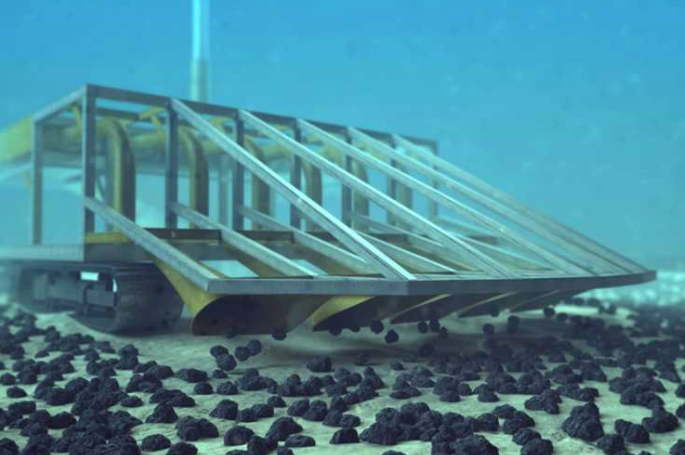 Note: This post was originally published in May 2019 but was lost due to server issues.

What are polymetallic nodules?

Polymetallic nodules are found in the world’s most pristine environment, the abyssal plains, which are vast regions of barren “dessert” and cover about 50% of Earth’s surface. Polymetallic nodules are formed when layers of metals (eg. iron and manganese) accrete around a core, one of the slowest geologic process in the ocean basins. A nodule field is an unusual deep-sea habitat because the combination of soft sediment and hard substrate promotes a diverse range of marine organisms, such as sponges, corals, and foraminifera. In fact, polymetallic nodules are thought to support a completely different community of organisms than what nodule-free habitats can support such as sponges or polychaetes (a type of worm), highlighting the need to protect these specialized structures. Due to their extremely slow growth (millions of years), and large contribution to the diversity of deep-sea life, polymetallic nodules are an important non-renewable resource from the deep-sea.

Unfortunately, even the deep-sea is affected by human-induced changes. Seafloor mining, the extraction of metals from the deep-sea, has the potential to destroy these important and complex communities in the deep ocean. Since it is very difficult to study these habitats, the effects of mining are poorly understood. Therefore, it is essential that deep-sea research efforts continue before mining becomes fully established in these relatively untouched regions of the world’s ocean.

How did scientists study the deep-sea?

The Clarion Clipperton Zone (CCZ) is a region in the Pacific Ocean of high interest for deep-sea mining because of the vast expanse of nodule fields. In order to predict the potential impacts from mining, the scientists in this study chose a region of the seafloor within an Area of Particular Environmental Interest site, which is a form of a marine-protected area. This region was selected because of its landscape similarities to the CCZ. Scientists assessed the influence of nodule cover on the bottom dwelling organisms of the deep-sea. A digital camera was attached vertically in an autonomous underwater vehicle (AUV) and images were taken every 0.85 seconds. The photographic surveys represented 18,580 m2 of the ocean floor which is about two and a half times the size of a football field! Manual and automated analyses of the surveys were performed to gather biological and environmental data. In order to relate the diversity of organisms present with the percent nodule cover, scientists classified types of organisms based on motility—either they were firmly attached to a nodule or freely mobile.

Overall, nodule cover in the region of interest was patchy, with max cover of 37% and an average coverage of 6.4%. Very slight changes in the availability and composition of hard surfaces can influence the larval settlement processes of seafloor organisms.

Most of the organisms in the study region were nodule dwelling, meaning they lived on or near polymetallic nodules. Thus, in the lower nodule cover class, these organisms may not find enough of their preferred habitat to develop and support the deep-sea community. Researchers found that there was a large change in the type of organisms found with just a slight increase in nodule cover from 1% to 3% indicating that even subtle changes in nodule cover can cause extensive changes in these deep-sea communities.

How does this research inform deep-sea mining operations?

The results from this study are not “all-encompassing”, but they do provide good insights that should be considered for conservation and preservation efforts. Mining impacts the deep-sea in two ways: 1) it destroys complex habitats for many organisms and 2) it causes excess sedimentation deposits that impact the ecologically important suspension feeders. The combined effects of nodule removal and sediment plume deposition may result in reductions of diversity and abundance of deep-sea organisms. Although researchers in this study attempted to mimic the conditions found in the CCZ, they note that the range in nodule cover was only 0-38% and this range possibly misrepresents the nodule cover found in central CCZ locations. In the CCZ, the nodules are typically larger with greater overall coverage.

Further exploration of different landscapes and regions of the CCZ is needed to inform the design of preservation zones within potential mining operation areas. To ensure limited nodule habitat loss and thus limited effects on biodiversity, preservation sites need to include areas of high nodule cover. The regions where nodules form are delicate so recovery from potential mining will be slow. It is hard to predict what the impacts of mining are in an area that we still know very little about. Good management practices can help reduce the impact of deep-sea mining, but require more thorough exploration. With the cooperation between scientists, government agencies, and stakeholders, low impact deep-sea mining is possible.